Deuteronomy 31:6  “Be strong and courageous. Do not be afraid or terrified because of them, for the LORD your God goes with you; he will never leave you nor forsake you.”

The first time I ran a half marathon, I found myself laughing at a certain point in the race. When runners get to mile marker #9, something drastic happens. Up until this point, everyone is running on the same course, half-marathoners and full-marathoners together. Everyone is mixed in and you don’t know who is running which race. You’d never know just by looking at them. But then at mile marker #9 the course literally is divided. It splits down the middle of an intersection. The half-marathoners turn left and the full-marathoners turn right. This is where I found myself laughing out loud and thinking very clear:

There is no way I’d ever run a full marathon! I could NEVER do that! Heck, I don’t know if I will even make it through the next 4 miles to complete this race! Ha! Those people are crazy! I don’t understand why or how they do it.

Fast forward four years and six half marathons later.  I’d registered for a full marathon after a stirring in my heart. It was time for a new challenge. Before I knew it, there I was! Standing at the start line of my first marathon.

I was approaching mile marker #9, the crucial turning point where the race split. The bright orange warning signs flashed in front of me. A man blasted through a megaphone, “Attention runners! Half-marathoners go left! Marathoners go right! Runners chaotically dashed from one side to the other. Two runners brushed up against me. merging to the left. And then the truth hit me hard: I was now running on the right side of the road…with fewer people. I glanced over my left shoulder, watching the half-marathoners fade out of my sight. Only 4 more miles and they’d cross their finish line. But for me, I had 17 more to go! At first a rush of excitement ignited my mind as I ventured into this new challenge. But when it quickly wore off, that’s when it hit me:

I was attempting something I said I’d NEVER do!

How many times in our lives have we dug our feet in the sand exclaiming,

I will NEVER do that!

But then later you find yourself walking that forbidden path. The one you said you’d never take a step onto. Maybe God has called you out of your comfort zone and you’re headed into a season of life you never dreamed you’d find yourself. Or maybe there’s an area of your life you’re clinging too tightly to, refusing to let go. Perhaps you’re gripped with grief or fear because of an unexpected trial.

I’ll never be able to lose weight; It’s just too hard.
I will never home school; I don’t have the patience for that.
I could never leave my hometown; I’ve lived here my whole life.
I could never invite my neighbor to church; I couldn’t handle the rejection.
I could never consider adoption; I’m fine with the family I have.

Fill in the blank. What is it for you?

It’s possible that your “I could never” is a fear lurking in the deepest part of your heart. If that’s the case, surrender your fear to Jesus and refuse to let the enemy rob you of joy. Maybe your “I could never” is something God is nudging you towards, requiring a deeper trust. Whatever it may be, God promises to be with us through it all. In the face of your “I could never”, let me point you to a truth where God uses the word NEVER.  To those who are His followers, He promises to NEVER leave us or forsake us. Instead of focusing on your “never”, embrace the truth of His”never”!

READY? Have you ever done something after you said you’d never do it? What caused you to step out and change your mind? Identify an aspect of your life you’re saying never to right now. Ask God to clarify whether it’s fear speaking or his gentle nudge.

GET SET. Hebrews 13:5  “…be content with what you have because God has said, ‘Never will I leave you. Never will I forsake you.”

GO! Heavenly Father, help me to trust you when my flesh says “Never”. When I’m tempted to let fear grip my heart, help me step out in faith and trust you. Help me not to worry about future trials, but to rest in the assurance that you’ll be with me when those times come. Thank you for the promise of never leaving me! Amen. 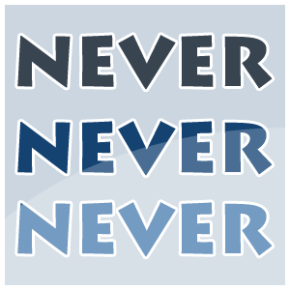